Why do young people refer to Korea as "Hell Joseon", and why is unemployment so high? 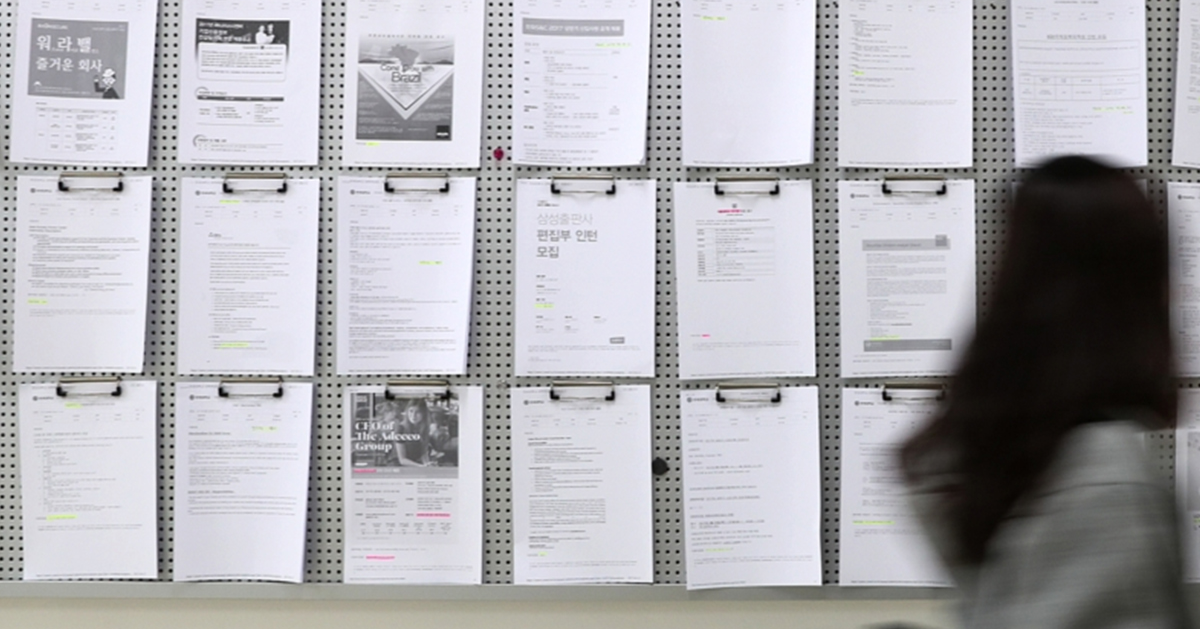 It's no secret that that the job market in South Korea is highly competitive.

With job openings declining and youth unemployment rates rising, an impeccable resume is a prerequisite for gaining a competitive edge.

In 2018, unemployed South Koreans aged 15 to 29-years-old reached one million, accounting for 10% of the youth population. This is a huge number by Korean standards.

But what do the numbers look like in 2021? Has the ongoing coronavirus pandemic made the situation even worse?

What is the outlook for young Koreans looking for an employment? In December 2020, an online article sparked a discussion on unemployment in South Korea.

The author of the article claimed to "understand why the unemployed commit suicide".

This can take a hard toll on people's confidence, and some eventually start shying away from meeting other people.

Today, there are more than 700,000 unemployed South Koreans. Although most of them are actively looking for a job, the older generation often slams them for "not putting in enough effort".

It seems like both government and business haven't done enough to try to solve the unemployment puzzle.

Nine out of ten job seekers in South Korea suffer from depression or other mental illnesses due to excessive stress. Unfortunately, there are also several cases of people choosing to end it all by committing suicide.

According to data released by Statistics Korea, there are about 308,000 unemployed young Koreans. 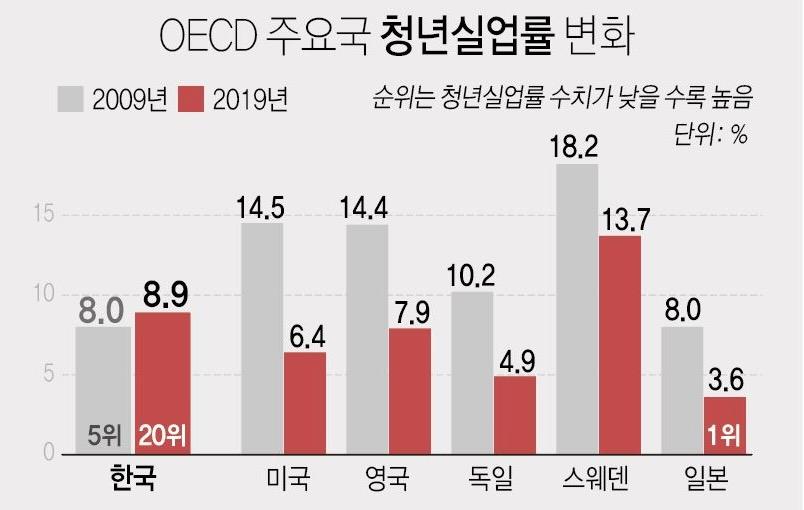 In 2020, the result of an OECD survey showed that most countries had recovered from the financial crisis that began in 2007. However, in contrast to other countries, South Korea's youth unemployment rates were on the rise between 2009 and 2019.

Around the time of the financial crisis, South Korea ranked fifth among the OECD countries in terms of youth employment rate.

However, while most countries improved their numbers as the world economy recovered, South Korea actually recorded worse rates than ten years before, dropping down to rank 20.

If we take a look at the overall unemployment rate in South Korea in 2021, we find that it rose to 5.4% in February.

Although this number was down to 2.8% of the population in September, we have to take into consideration that this data only accounts for unemployed who are not actively looking for a job. What would the number be if we add those who are currently seeking an employment?

However, even this estimate doesn't tell the full story. For example, these numbers do not include people who do any kind of part-time job.

The Reality of Being Unemployed in South Korea Most companies in Korea prefer fresh graduates over people who have been on the job seekers' market for a while.

Women in South Korea usually graduate from college at the age of 22 or 23, whereas most men graduate around 25 or 26 due to their military service.

Both companies and job seekers themselves consider these ages the ideal time to start a job career.

Most college students hope to have their future job secured before they graduate, ideally more than six months ahead of their February graduation ceremony. Most job seekers in South Korea are aware that companies usually only consider job seekers under 30 years of age in the case of men, and under 28 years for women.

This tacit knowledge can have a profound impact on students' decisions, with many Koreans turning down opportunities to study abroad as it may delay their graduation.

Because of this perceived age discrimination, many also hesitate to go abroad for Working Holiday, or spend another year preparing for the collage entrance exam if they fail to get admitted to their school of preference the first time.

Every decision Koreans make that delays their graduation could potentially be critical to their future success.

The Reality of Korean Workplaces You might have heard that Koreans are almost obsessed about civil servant positions. Being employed by the state is a matter of both prestige and job security.

The sometimes ruthless working hours demanded by private companies also plays a role as the number of applicants for the Civil Servant Exam seems to increase year by year.

Indeed, more than 50% of current college graduates in the country are said to be preparing for the exam.

As long as you pass the Civil Servant Exam, you can secure employment without previous experience or a lengthy resume. Furthermore, in contrast to positions offered by private companies, there is no risk of being rejected after a job interview.

However, the perks of passing the exam have also made it highly competitive. If you go to the Noryangjin area, you will see plenty of cram schools where the students dedicate most of their waking hours to preparing for the exam.

Only about 3 percent of the people who take the exam every year pass it, and the remaining 97 percent either spend another year preparing for the next exam or give up. Many Koreans who are looking for a full-time employment at a company have to go through the process of internship.

As an intern at a company, they receive less salary, and the idea is that they instead get the opportunity to learn the ropes and eventually be upgraded to full-time employees. An internship usually lasts between three months to a year.

However, it turns out that most internships do not lead to a full time employment. Instead, many are told that their skills are insufficient, and they are forced to seek internship at another company.

It's no wonder that many young Koreans start doubting both themselves and the society, labeling themselves "Eternal Interns".

How Difficult Is It To Find A Job In Korea? Last year, the Korean job search platform Saramin (사람인) surveyed 177 companies to find out the competition rate for their job listings. They concluded that the rate was 36:1.

However, this was just the average, and for the most attractive positions the competition rate was often over 100:1.

For example, SK Innovation had 100 job vacancies, to which more than 10,000 applicants submitted their resumes.

Another top 50 company, Kolmar Korea, had 60 vacancies and more than 6,500 applicants. The competition for public enterprise positions, which are perceived as more secure and attractive, is even more fierce.

For example, when KOSPO (Korea Southern Power) announced that they would recruit 84 college graduates, a whopping 11,597 people applied.

The competition rate for management and accounting positions offered by KESCO (Korea Electrical Safety) was even higher at 236.5:1.

This above numbers shown just how difficult it is to secure an attractive job position in South Korea.

Many job seekers in South Korea look more at the company name than the specific type of job when they apply for a position.

When asked about the most important factors when they apply for a job, most people choose ”high salary", "extra benefits", and "stability". That's why most Koreans prefer working for large companies who can satisfy all of these demands.

To land a job at one of the large companies in South Korea, your educational background plays an important factor.

However, it's usually not enough having studied the right field. Instead, many companies put more importance at what university you have graduated from, and many Koreans feel like their career prospects are highly limited if they graduated from a less known college.

But although graduation from a prestigious college is a good start, you need even more to have an edge. Your resume should show that you possess a set of additional skills, including high scores on official English tests.

In the end, most young Koreans have to give up of their dream jobs, accepting the fact that any position may be better than nothing at all.

It seems that unemployment rates are bound to rise as the job market, both in Korea and globally, has become more volatile.

However, even with this in consideration, the situation in South Korea seems quite extreme.

The picture above compares two students who graduated from the Department of German Language and Literature at Seoul National University, the former graduating in 1992 and the latter in 2014.

A quick look tells us that the graduate of 1992 got a position at a major company despite a relatively sparse skill set on paper.

However, the graduate of 2014 failed to be accepted to any of the 23 positions applied for, despite having a stellar TOEIC score and many other certificates.

In this article, we took a look at youth unemployment in South Korea.

How is the situation for young job seekers in your country? Is the job market as competitive and unforgiving as in South Korea?