Everything You Need to Know About Gyeongbokgung!

From history to architecture, this is everything you should know about Gyeongbokgung! 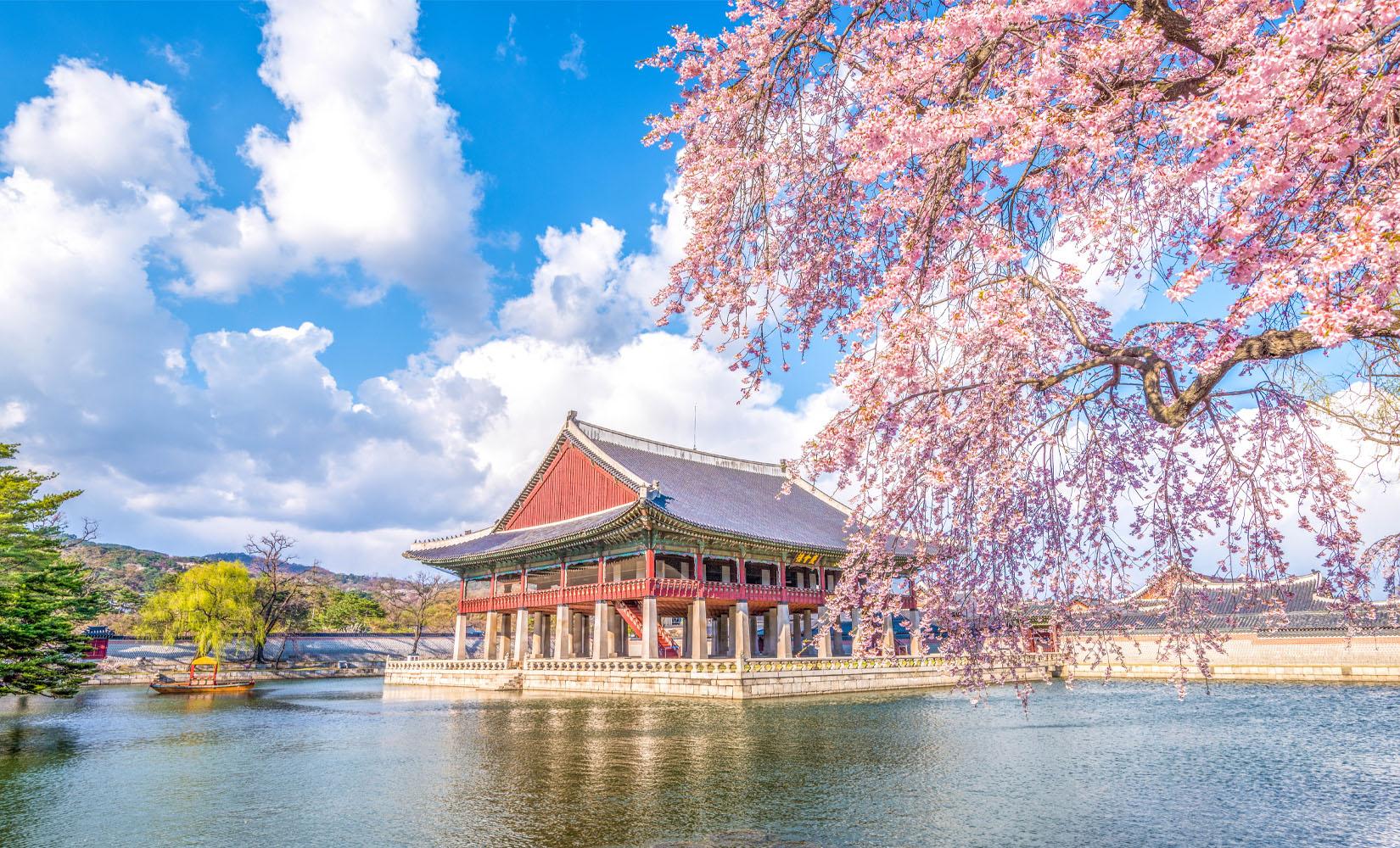 Gyeongbokgung Palace is one of the most visited, and well-known tourist attractions in Korea! Anyone that takes a trip to Korea will most likely also be taking a trip out to Gyeongbokgung. Although it is a very popular tourist location, many visiting Korea do not know all of the history or important information that may make their trip out to the palace more valuable. Today, we compiled a list of the most asked questions regarding Gyeongbokgung and are here to answer it!

1. How long did it take to build Gyeongbokgung? 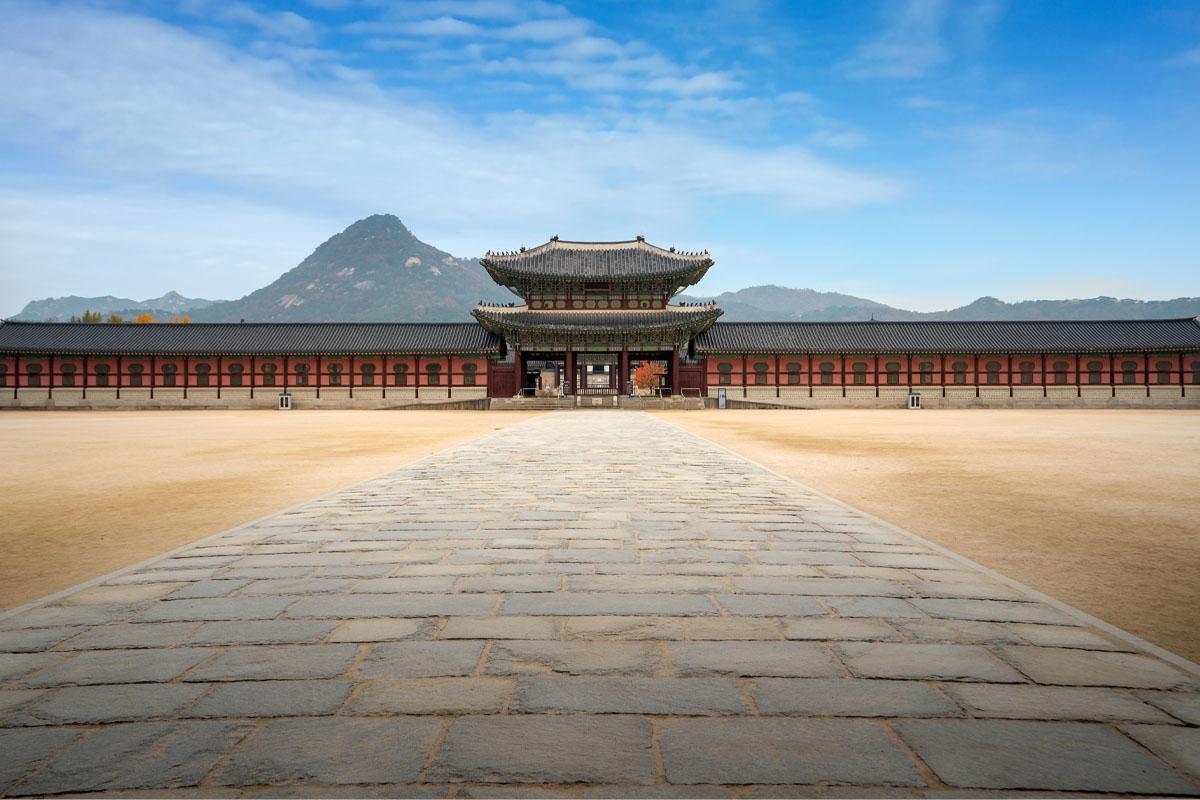 It took 10 months for the palace to be built. Construction began in December of the 3rd year of King Taejo's rule (1395) and was completed in September of the next year.

Inside the palace there was a place for national affairs to be discussed as well as a place for officials to go to work and the palace was surrounded by gates and walls. This was the birth of Gyeongbokgung!

2. Is it true that the Blue House was originally Gyeongbokgung Palace? 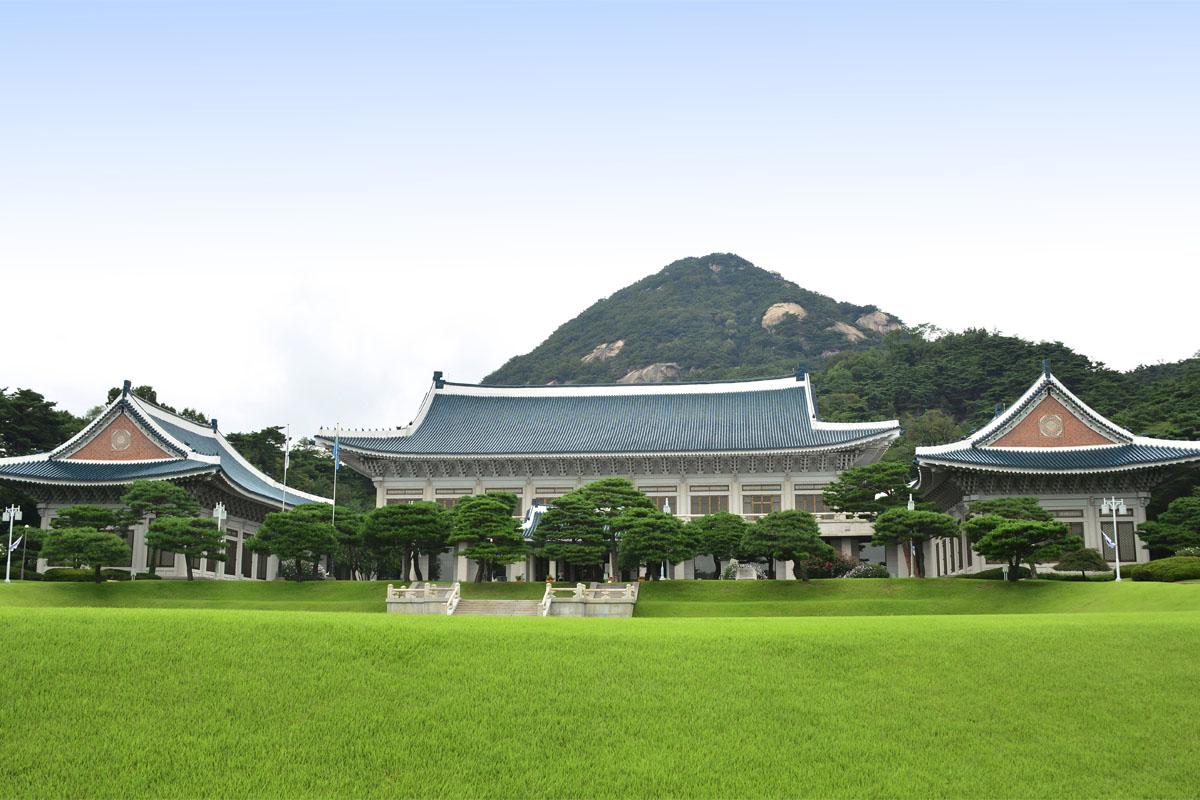 The current Blue House site is the former site of where Gyeongbokgung Palace used to be located.

Behind the northern gate of Gyeongbokgung called Sinmumun. there is a garden that was used as a place where the king and his servants played archery and selected national talents.

After liberation, the facility built was called 'Gyeongmudae' and used as the president's office. Later a new house was built and renamed 'Blue House' and the house where the governor lived was demolished.

3. Why did Gyeongbokgung remain in ruins for so long? 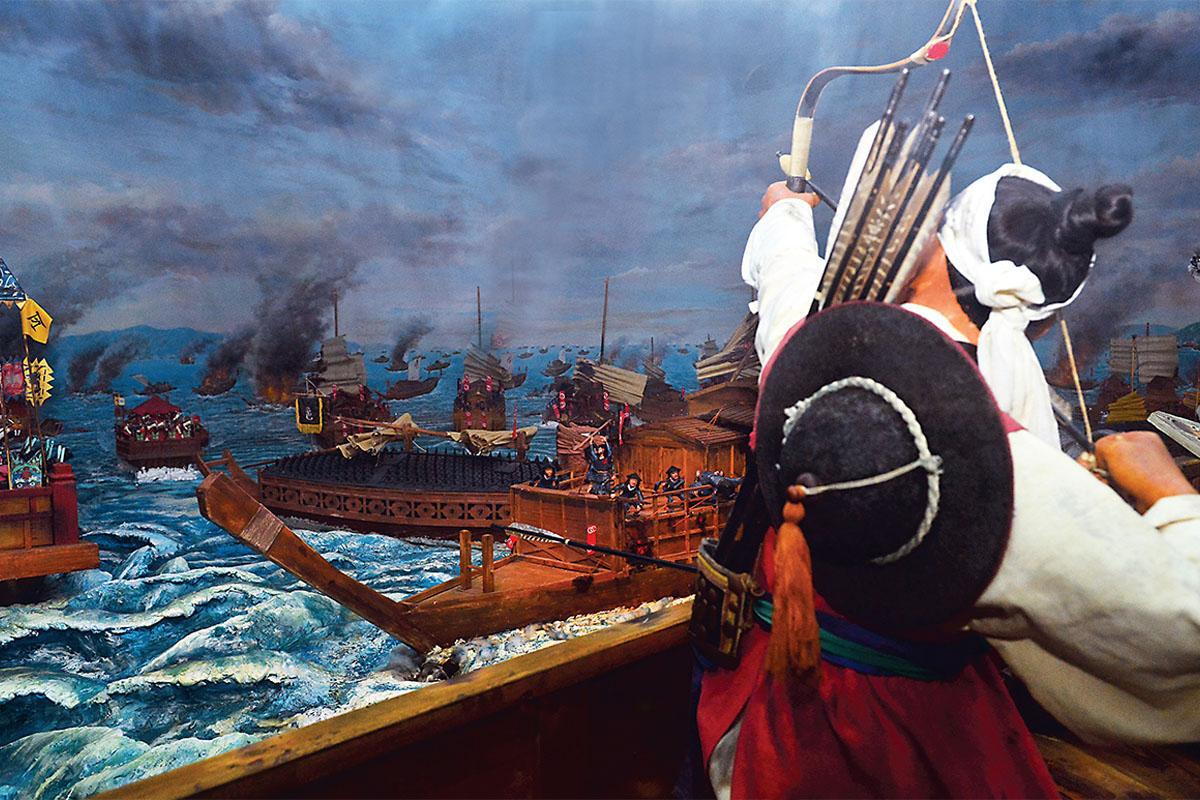 During the Imjin War in 1592, all palaces including Gyeongbokgung, CHangdeokgung, and Changyeonggung were burned down. King Seonjo temporarily stayed at the present Deoksuguna Palace but when the war was over and the destroyed palaces were being rebuilt, Gyeongbokgung was not rebuilt.

There were issues in mobilizing manpower and materials for the rebuilding of Gyeongbokgung due to it's large size. Instead, Changdeokgung and Changgyeonggung were built first.

After that, Gyeongbokgung remained empty for around 720 years only to be rebuilt by Daewongun during the reign of King Gojong.

4. Where was Hangul (Korean Alphabet) created? 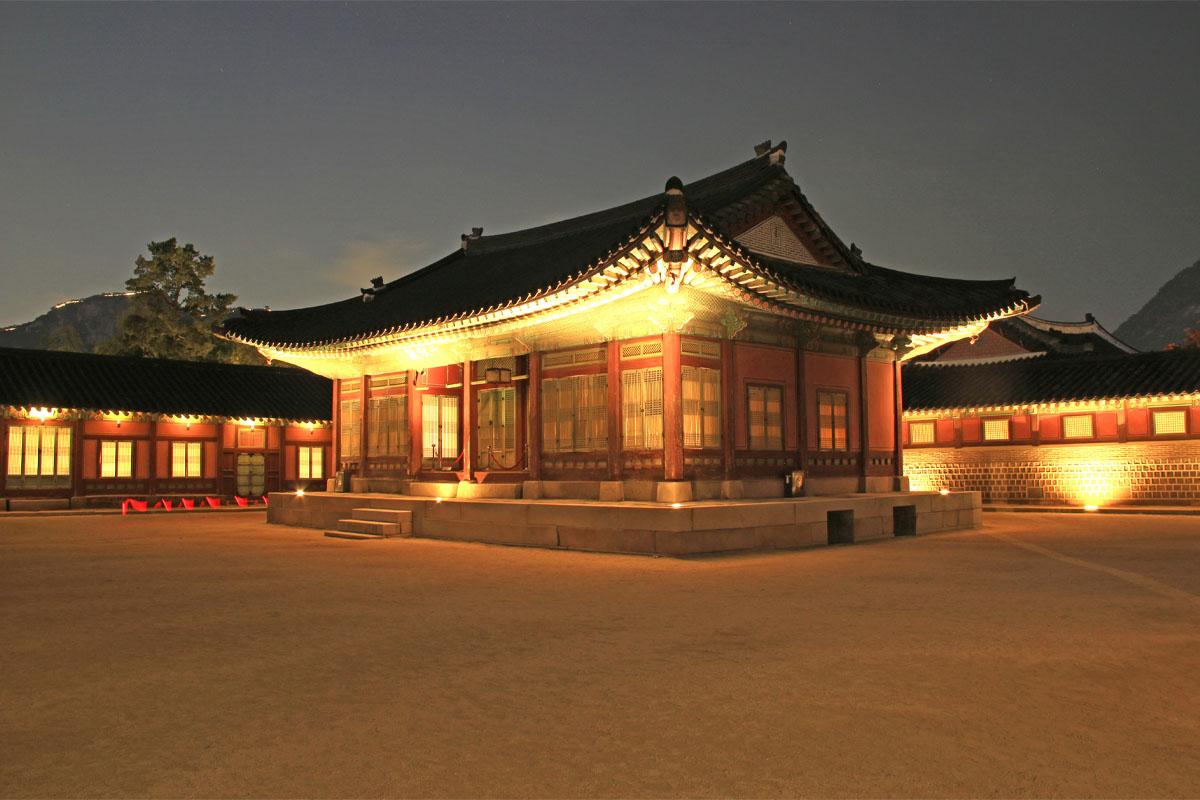 King Sejong the Great and scholars of Jiphyeonjeon created 'Hunminjeongeum' (the first document describing the new Korean script) so that Korean people could conveniently read and write, without the difficulty of the previous writing system was mainly Chinese characters.

Hangeul is recognized as a great cultural heritage and is even registered as a World Cultural Heritage.

The site where Hangul was invented was in the Sujeongjeon Hall in the Gyeongbokgung Palace!

5. Where did Dae Jang Geum cook? 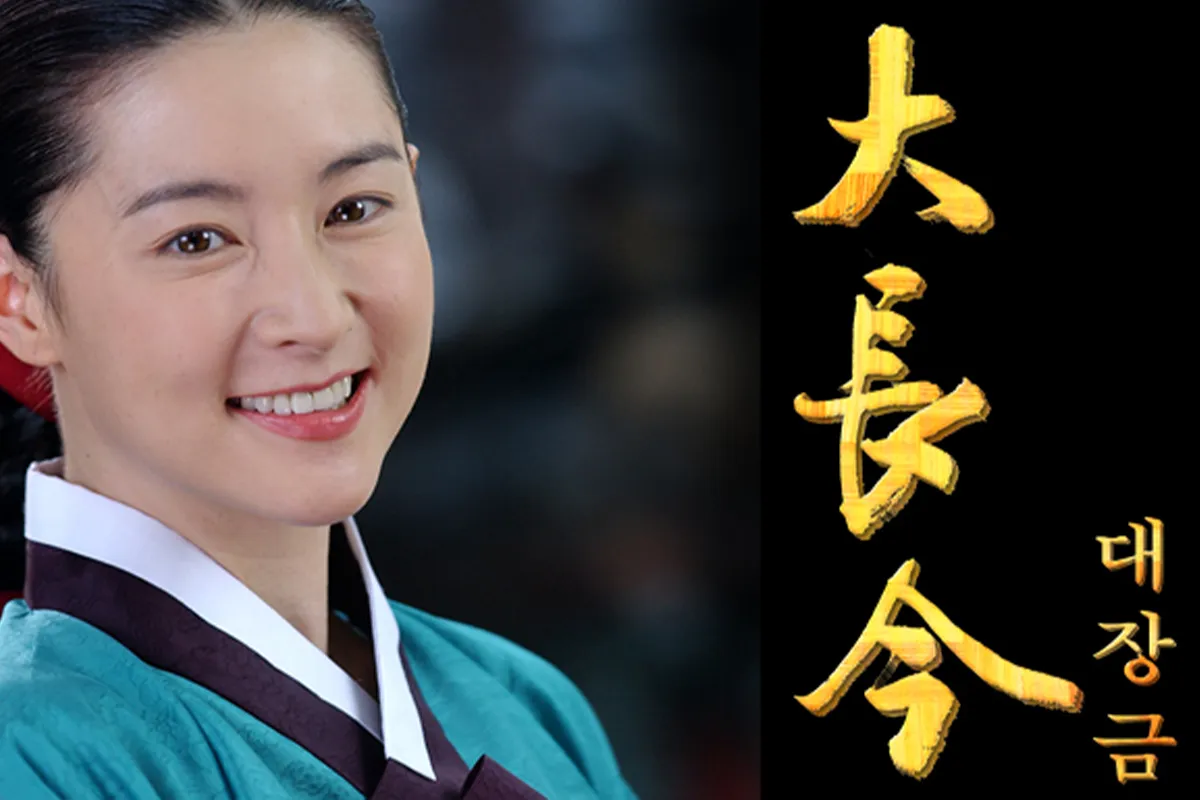 Dae Jang Geum was a famous figure during the reign of King Jung jong. She was a female medic that nursed and cared for sick people.

In the TV drama 'Dae Jang Geum", Dae Jang Geum transforms from a medic to a royal chef and plays a great role. However in the Veritable Records of the Joseon Dynasty, there is only a record of a medic, rather than a royal chef.

However, there is a kitchen in the palace where the court ladies cooked and made food. If Dae Jang Geum actually cooked food like portrayed in the drama, we assume that she would have used the palace kitchen!

6. Where was the first place to have electric lights in Korea? 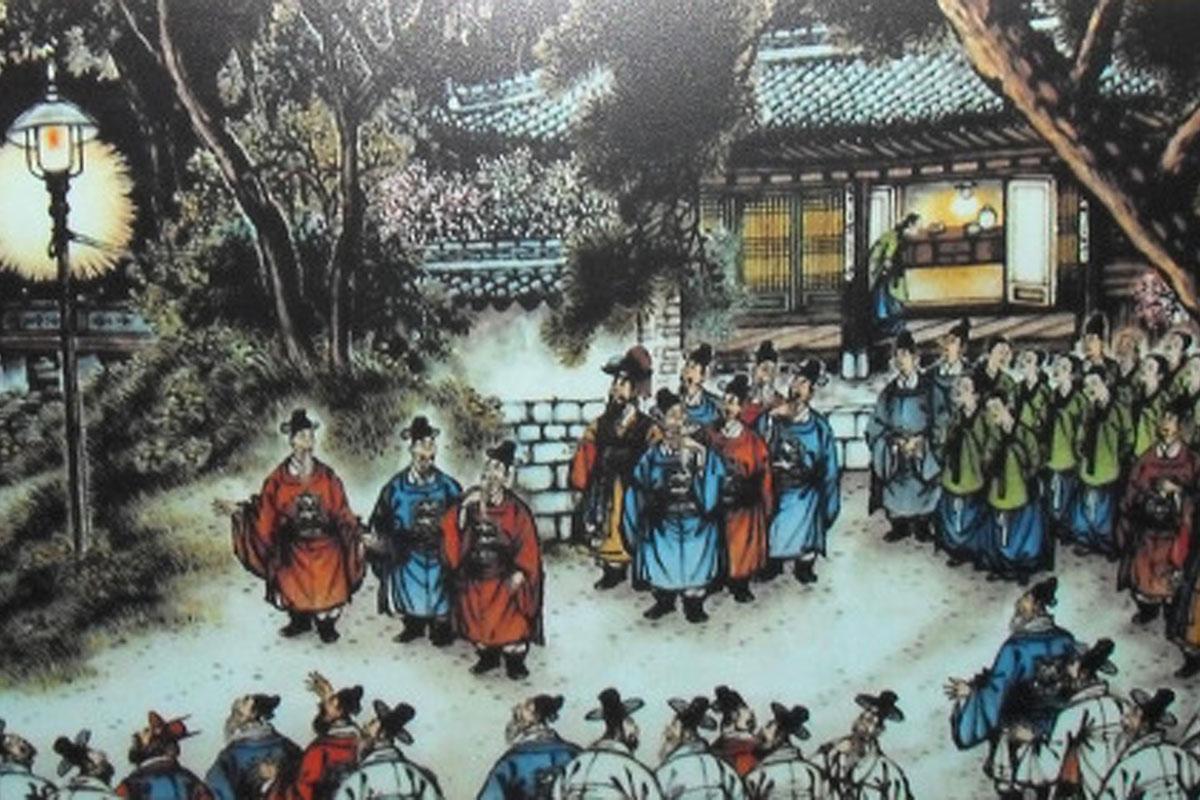 The first record of electric lights being used was in front of Geoncheonggung!

Korea's first American student Gil-Jun Yoo returned to Joseon and introduced the light bulb to King Gojong as a method to brighten up the dark night.

There is also a stone with the phrase "Korean Electric Generator" engraved in at the Geoncheong Palace.

7. Is it true that a dragon appeared from Gyeonghoeru Pond? 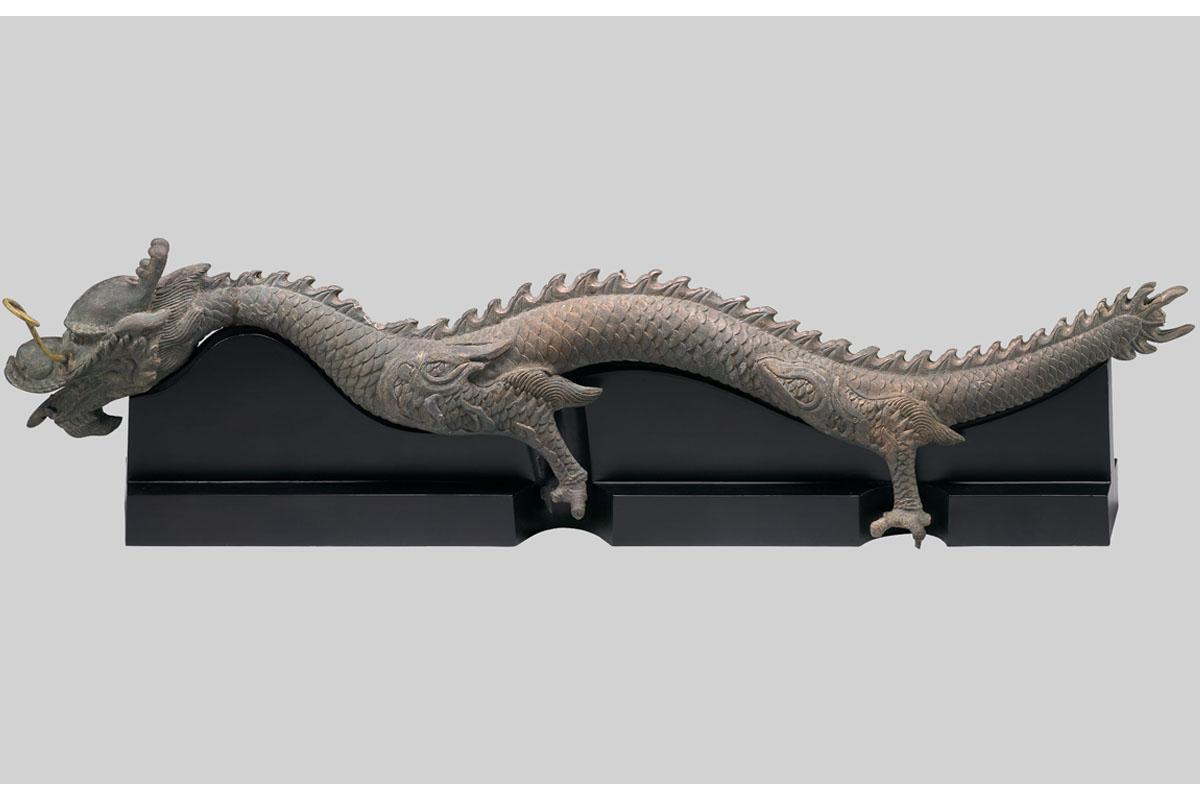 Since ancient times, dragons have been thought of as mystical creatures that can control water and make it rain. The dragon was placed in the pond in hopes that Gyeonghoeru would not catch on fire and to bring rain.

The dragon is now on display at the National Palace Museum of Korea, not Gyeonghoeru pond!

8. What was the daily routine of a king in the Joseon Dynasty? 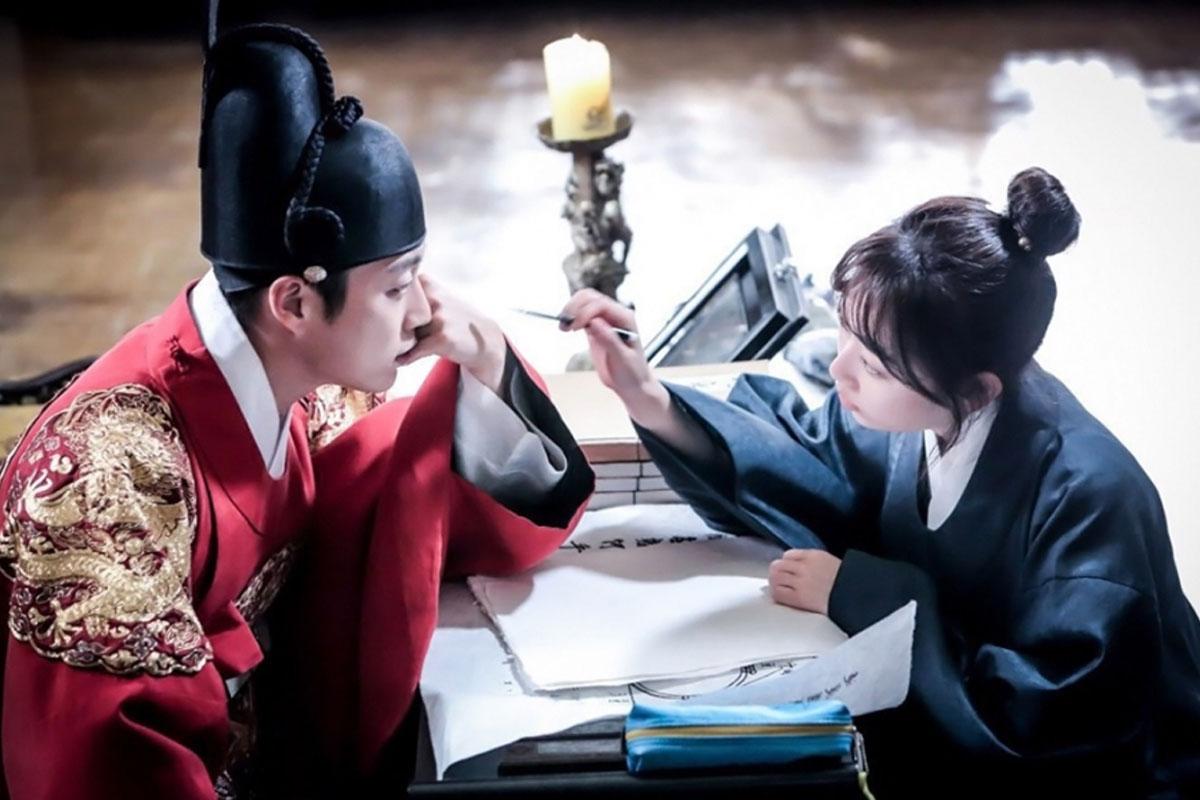 Kings all had very busy days. it is said that the king had more than ten thousand things to do such as greet elders and meet with his councils to discuss the affairs of the country.

Along with those tasks, the king had to study hard in order to gain all the skills needed to rule the country. The king would study subjects like confucianism and history!

9. How many people lived in Gyeongbokgung Palace during the Joseon Dynasty? 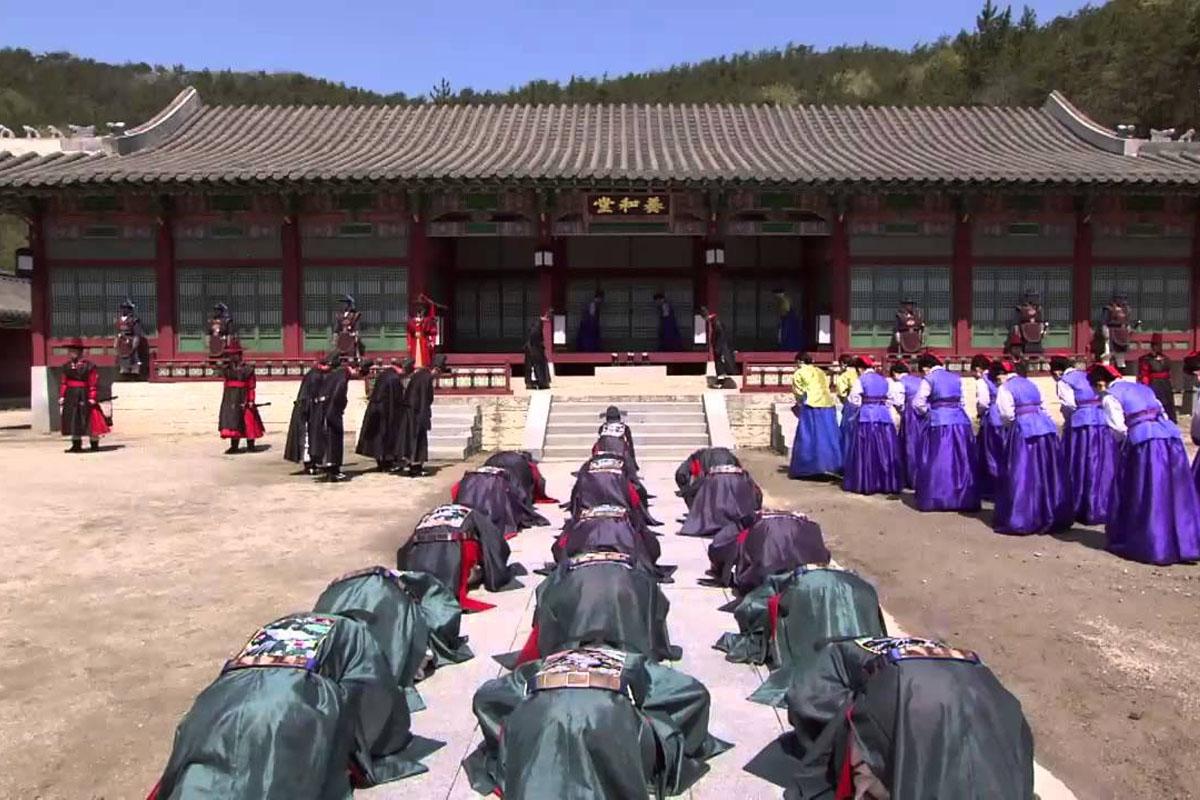 It is not know for sure, but it is said that around 3,000 people were estimated to live in the palace. There were about 500 members of the royal family including eunuchs and court ladies as well as around 2,000 soldiers that guarded the palace and around 500 servants that worked in the palace.

10. Where did Gyeongbokgung Palace officials work during the Joseon Dynasty? 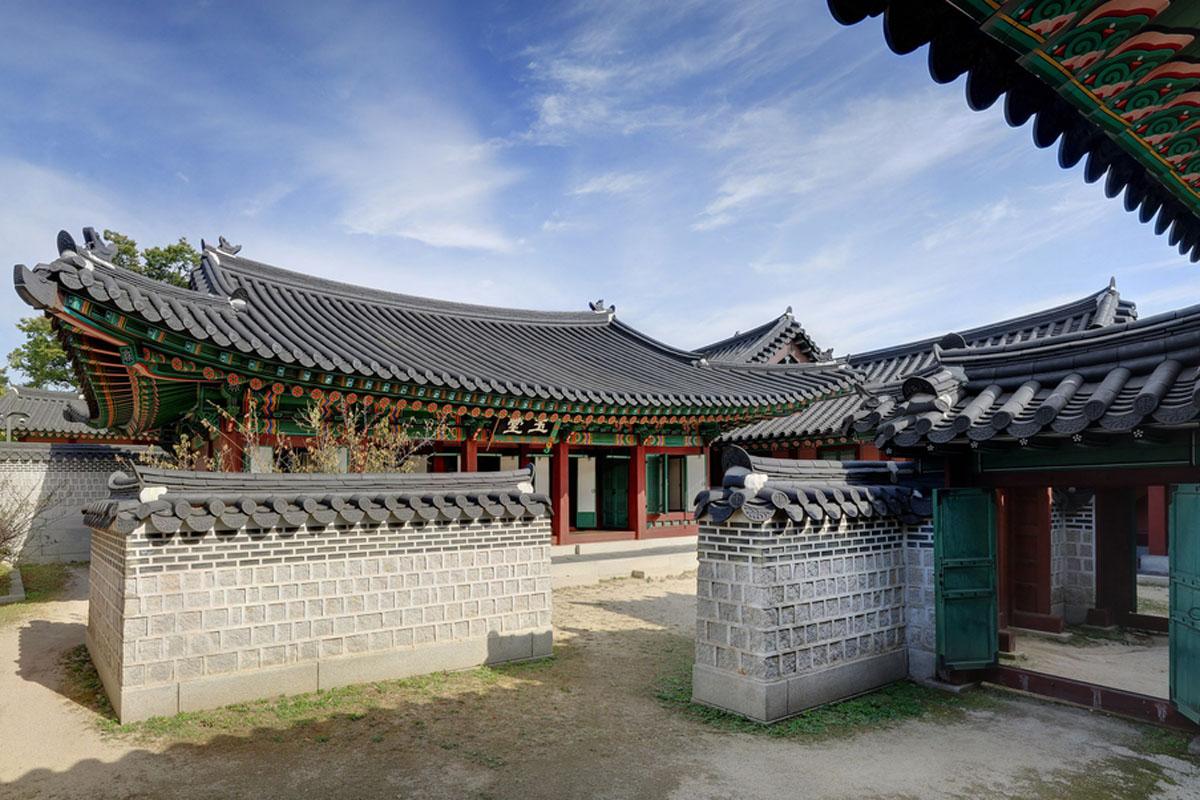 In Geyongbokgung Palace, there were many officials who helped the king with the affairs of the country.

The officials' offices were located southwest of Gyeongbokgung Palace. There are several government offices such as Seungjeongwon, which delivers the king's orders, Hongmungwan, which helped the king make decisions about the country and Naebyeongjo, who gaurded the palace.

There was also an inner hospital in charge of the health of the king and the royal family, Saongwon in charge of food and Songwon, which was in charge of clothes.

11. Why are there nets placed under the eaves of large building in Gyeongbokgung? 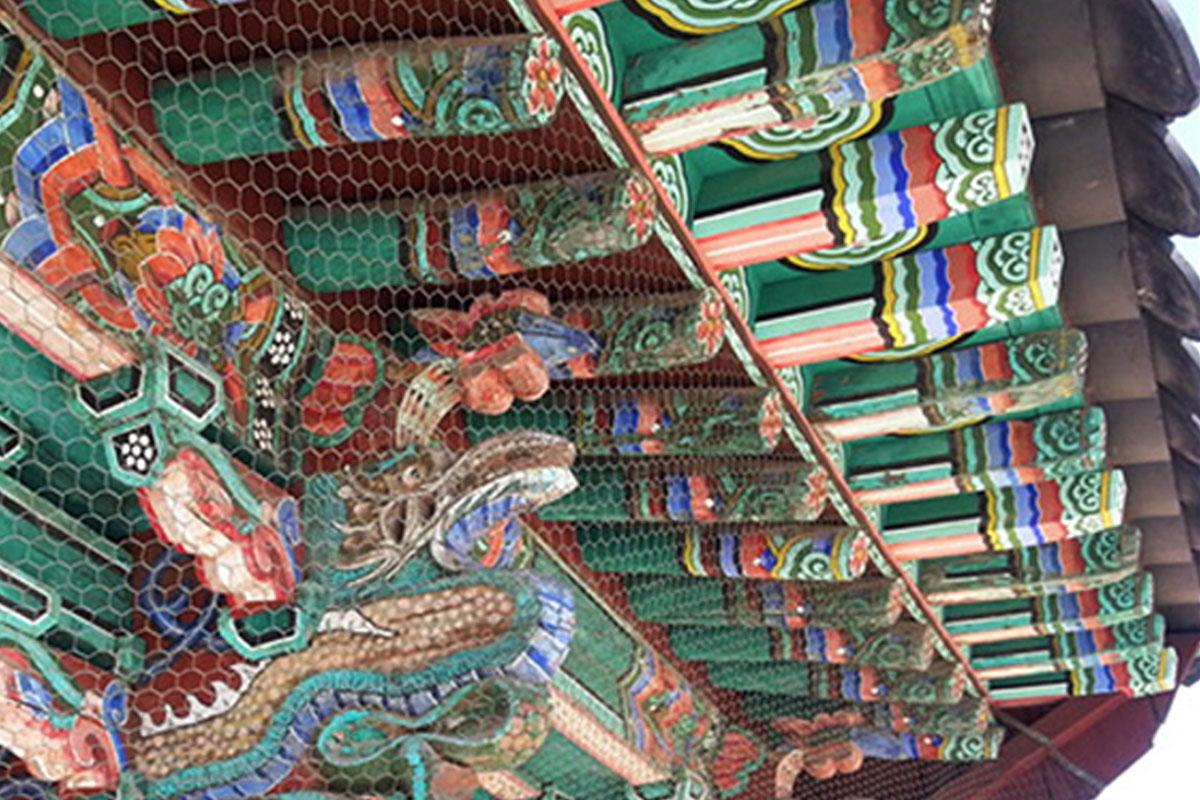 Have you ever looked around Gyeongbokgung palace and noticed these nets under the pillars of buildings and the eaves of the roofs?

These nets are called bush (부시) and are made so that birds will not fly in and build nests under the eaves or perches.

12. What is the pattern on the chimney with Ten Symbols of Longevity at Jagyeongjeon Hall of Gyeongbokgung? 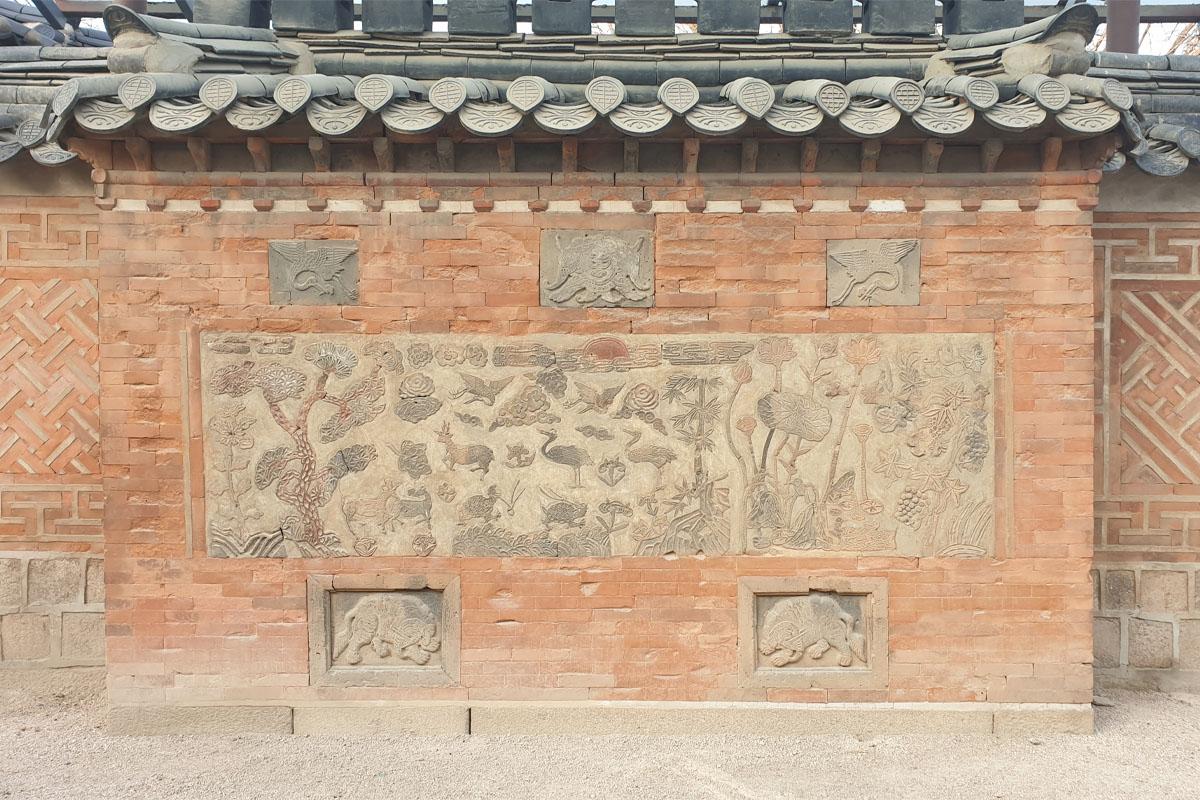 On the wall behind Jagyeongjeon, there is a chimney with a pattern that is meant to help live a long and healthy life.

If you look at the wall of the chimney, there is a large sculpture in the middle and small paintings at the bottom. The large picture in the middle is a sculpture of ten longevity and inside there is carvings of the sun, mountains, clouds, rocks, pine trees, bamboo, turtles, deer, cranes, and firewood.

13. Where was Empress Meyongseong assassinated? 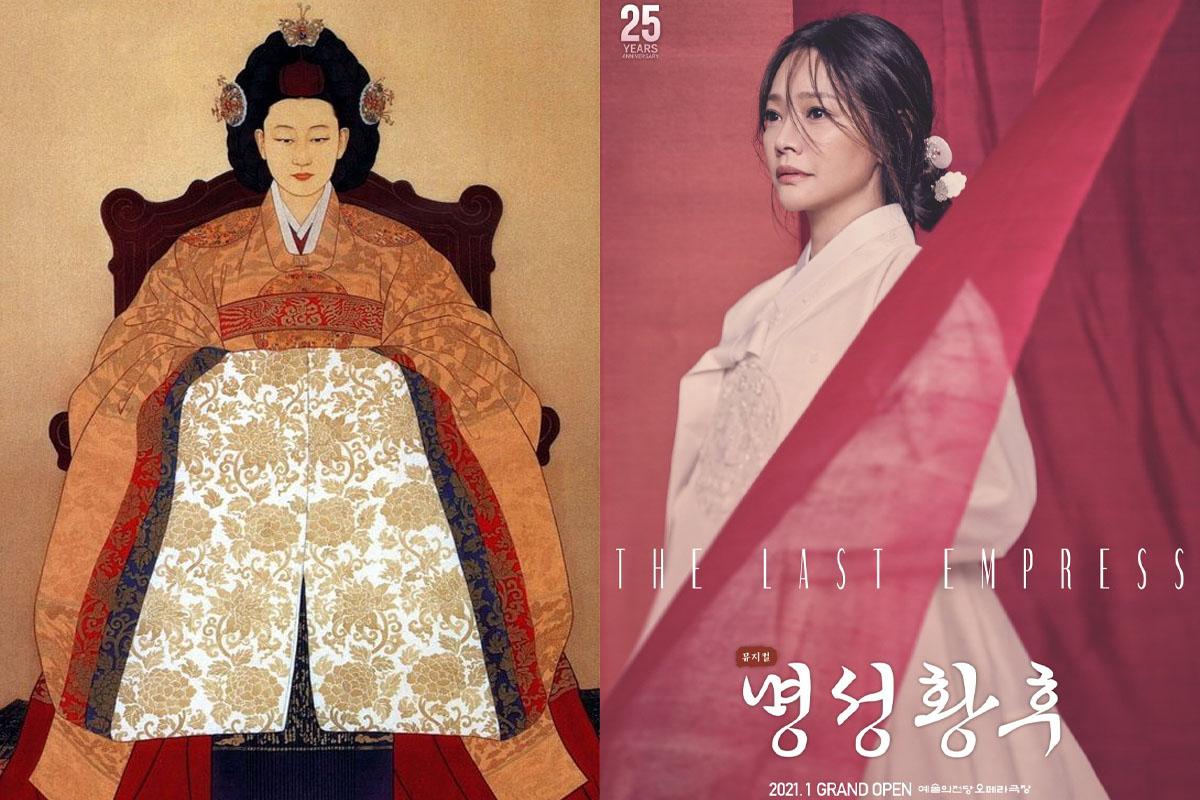 Japan tried take over rule of Joseon, but when Empress Myeongseong befriended Russia, she was assasinated.

At dawn on October, 8th, 1895, Japanese soldiers entered Gwanghwamun Gate of Gyeongbokguyng Palace and went around the west wall of Geunjeongjeon Hall, and went to Gonnyeonghap in Geoncheong Palace behind Gyeongbokgung Palace and killed the empress.

14. What happens if the king died? 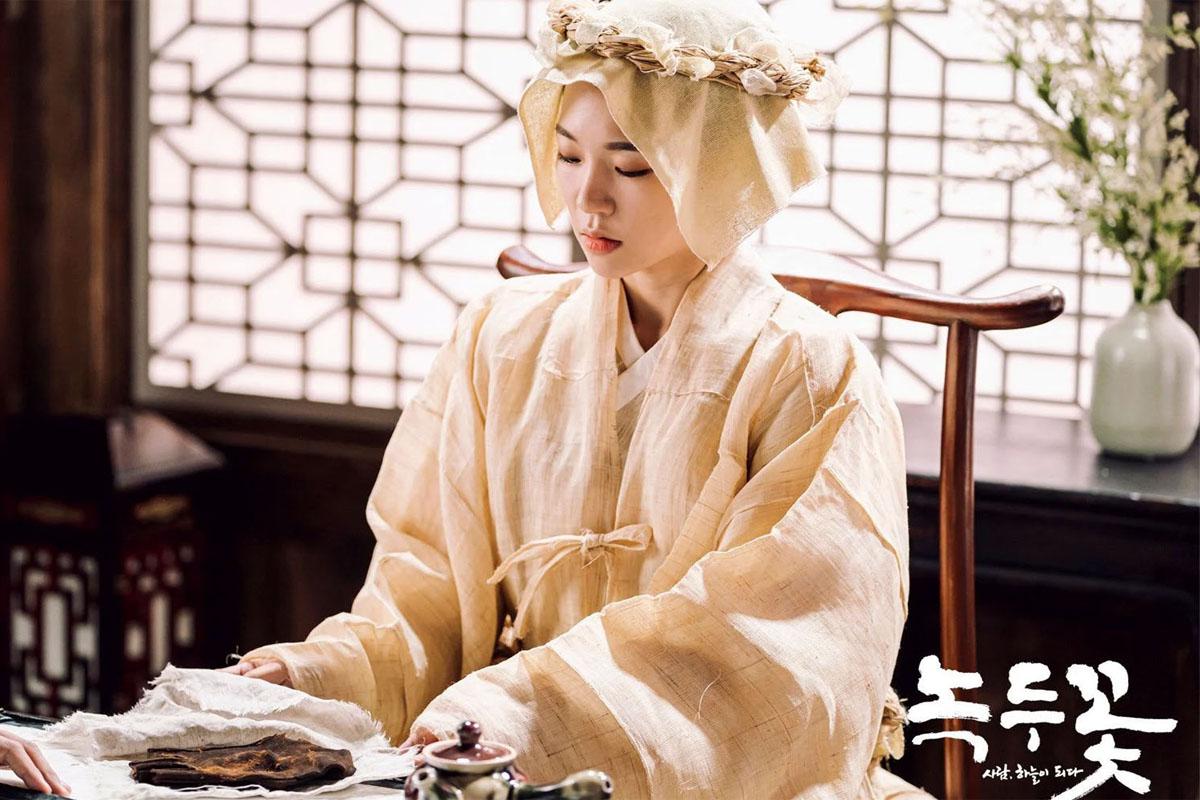 When the king dies, the body is placed in a mortuary inside the palace, and when the funeral scedule is deccided, it is moved to the royal tomb.

In the Joseon Dynasty, if your parents died, you would mourn their death for three years to thank them for raising you.

After the king's three years of mourning are over, the gods enshrined in the palace are transferred to the Jongmyo Shrine to be enshrined.

15. What is the animal shaped figure on the roof of the Bokgung? 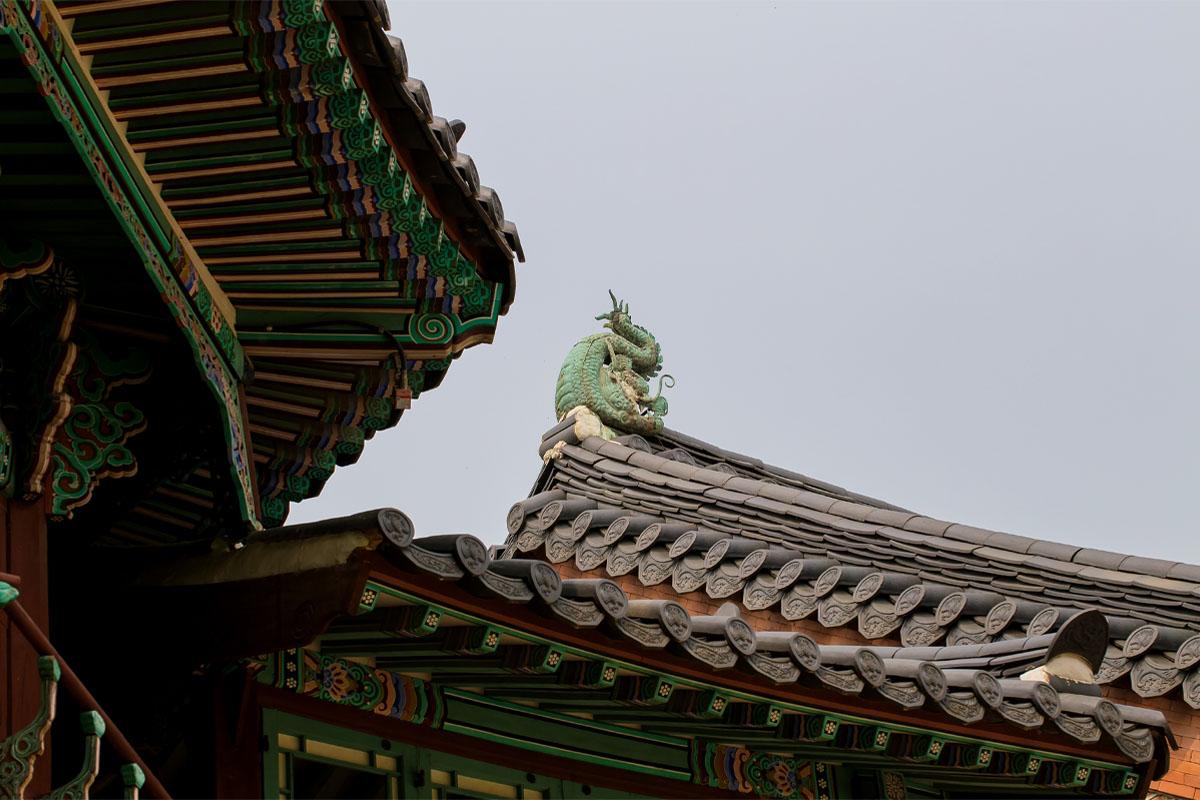 If you look closely at the roof of the palace, you can see that there are animal shaped tiles and figures on the roof.

These are decorative tiles are are imaginary animals that are said to protect the palace from fire and are placed on the roof to protect the whole palace.

You can find these animals that are usually some sort of dragon shape on many palace buildings and older Korean buildings.

16. What is the stone that is standing in the yard of Geunjeongjeon? 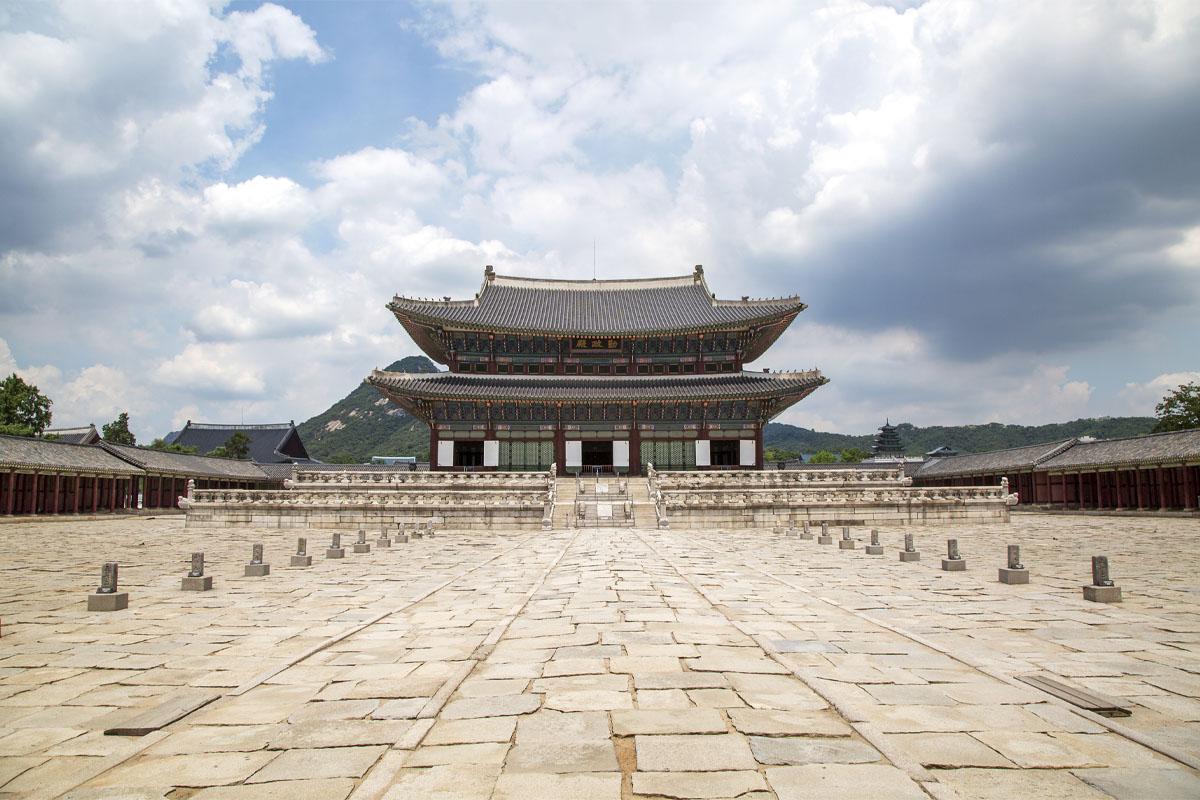 When you enter Geunjeongjeon Hall of Gyeongbokgung palace, there is a large yard and you can see the magnificently tall Geunjeongjeon Building. The road leading up to Geunjeongjeon is called Eodo.

However, you can see stones that look like tombstones lined up on the left and right sides of the road.

These stones are called 'Pumgyesok' and are stones marked so that servants can line up according to their position during the ceremony at Geunjeongjeon.

17. What is the animal statue in front of Gwanghwamun? 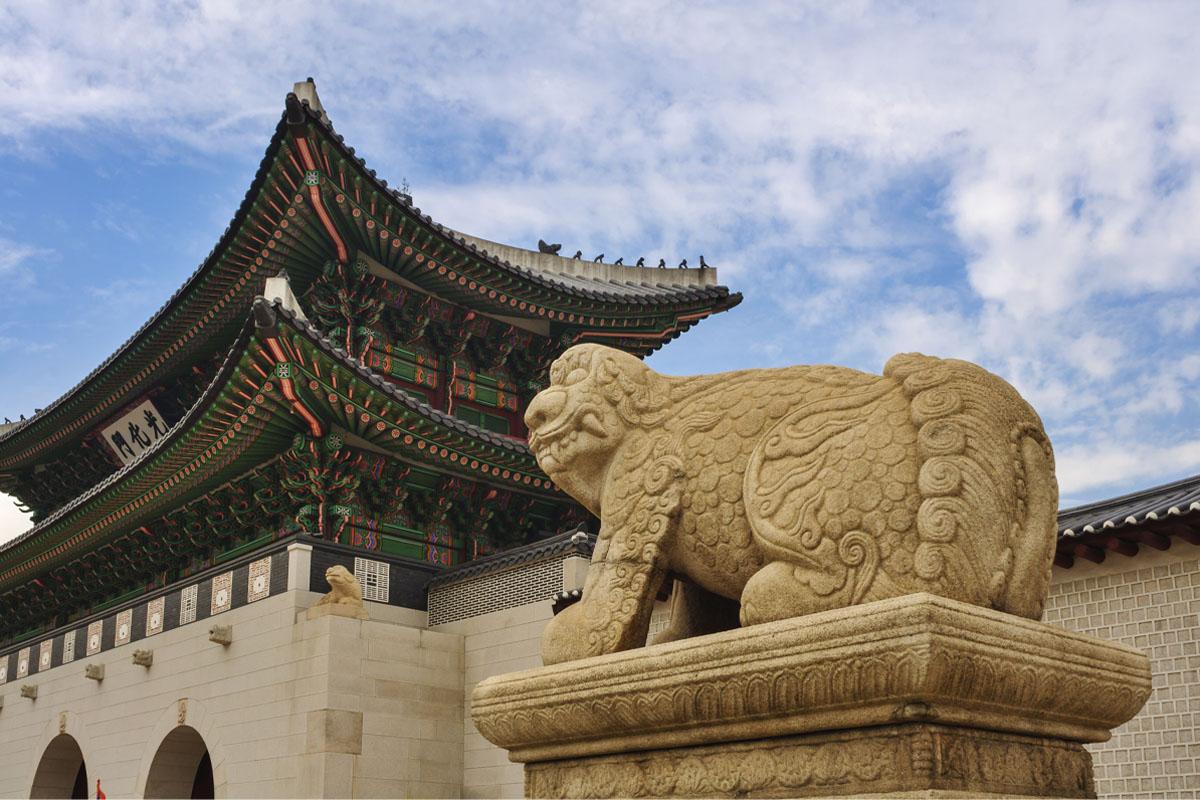 There are statues that look like tigers to the left and right of Gwanghwamun. This statue is called Haetae.

Haetae is an imaginary animal, and legend has it that they use their horns to stab those that made mistakes.

It is said that those who saw this statue would make sure not to behave accordingly when they enter the palace grounds!

We hope that through this Q&A you were able to learn more about Gyeongbokgung and the history behind it! We hope that this helps make for a more memorable experience the next time you go visit Gyeongbokgung! If you have any other additional questions, please leave a comment below or send us an email at support@creatrip.com! Also make sure to follow us on Instagram, TikTok and Facebook to stay updated on all things Korea!